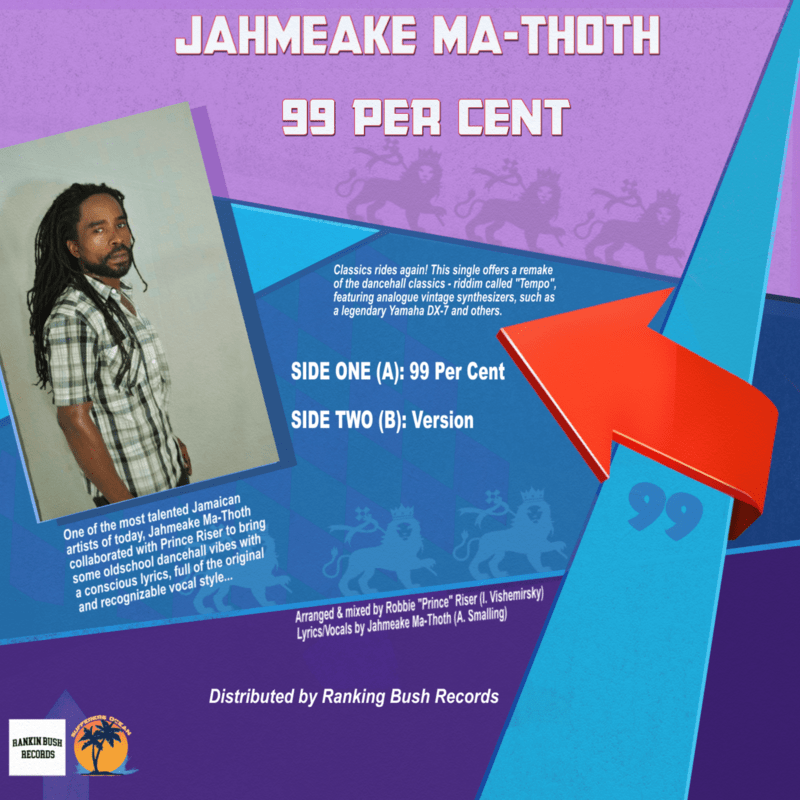 Born and raised in the parish of St Elizabeth, Jamaica. His parents named him Andy Jameake Smalling, his father was hoping that his first son would became a professional cricketer, so he named him after the great West Indian player Andy Roberts. He wasn't so certain where the "Jameake" came from, because none of his parents was of the the Rastafarian faith. But the love he later developed for music led him towards the faith, and eventually led him to his inner-being, and then the name affirm to him certainly on Sept 6th,1984 and a son of Rastafari was born. Jahmeake love for music began very early, Where he was influenced by the mix-tapes his father would brought home from time to time, which contain recordings of dance sessions which was played by sound systems such as Stone Love, Kilamanjaro, and Black Kat etc. He also founded love in performances of artists such as Charlie Chaplin, Dennis Brown, Bob Marley, Garnet Silk, and Peter Tosh. Jahmeake's young mind would then dream of the days when he would be able to deliver music with such great passion. At the age of fourteen, Jahmeake got the opportunity to record his first demo, it was filled with so much excitement, he decided to took the tape to school and it was stolen from his backpack. Rather worse he didn't have a second copy. But that didn't damper his determination to became a recording artist. In 2004 while he was a hotel worker in the resort town of Negril in Jamaica, Jahmeake would performed on a weekly talent shows, in fact it helped to built his confidence so much, that two years later when he was working on a cruise ship, he also performed on some talent shows held on-board the ship.In 2008 Jahmeake was able to set up his own home studio, and establish his own label (Seventh Trumpet Production) where he started out producing himself and several other local artists. A year later, the label released its first project titled "life and more life" which featured his first single called "High." In 2010 he teamed up with Jahrooti now known as Jah Rooti on a track called "Rocket." Since then Jahmeake has evolved immensely in music, he has studied/practice and learn to play the Keyboard, audio engineering, composing, and mastering. He has also claim a new name, one that symbolically reflect his African ancestral linage (Ma-Thoth). Jahmeake Ma-Thoth has also completed his debut album titled" Base Metal" which he is hoping to put out in the first quarter of 2015. He is also working on several other singles to be released prior to the album, with the latest of such being (philosophy of mad) which is currently doing very well online.His catalog can be explored online at https://soundcloud.com/jahmeake Jahmeake is well set to continue working even harder to accomplish his dreams, and to establish a name in music business for himself, which will inevitably allow him to immortalize himself through his works. Email; Jahmeake@gmail.com